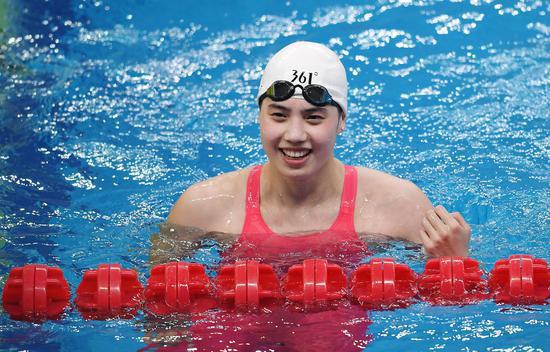 Zhang Yufei took the lead in the first 50 meters, swimming out of 25.76 seconds, more than 1 second faster than the second place, Shandong team player Wang Yichun, and still maintained the "flying over water" speed during the sprint, breaking the Asian record in one fell swoop. "This result is beyond my imagination. I expected it to be a bit slower than this, just after 56 seconds or 55 seconds 8." Zhang Yufei said after the game.

Zhang Yufei said that this national swimming championship is the first competition since the epidemic. From the winter training in November last year to the present 11 months without competition, every athlete wants to see how his level is, whether it has improved or declined. "In these 11 months, I feel that I have improved significantly and I can't wait to see how much I can swim."

But before the game, Zhang Yufei was still a little nervous. "Before I went on the field, I kept shaking my coach, and I said I was nervous. The coach hopes that I can rush out in all games and don't think of myself so weak. It turns out that I can rush out and top it down. Say.

The Tokyo Olympics will be postponed until next year. Zhang Yufei thinks this is a good thing for her. "If the Tokyo Olympics are held as scheduled, I am worried that I will not reach that height. After the postponement of the Olympics, there is still nearly a year left, and I can still improve. The 200-meter speed can be improved a bit, and it will also be a medley for our team. Make a little more contribution to the relay." Zhang Yufei said.

On the 27th, the butterfly swimmer accidentally broke the national record with 52.90 in the women's 100m freestyle preliminaries. (Finish)